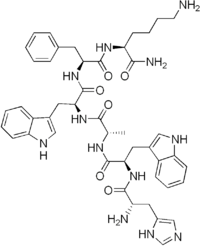 Ever notice a modern professional bodybuilder’s stomach? Do you think a man who looks 9 months pregnant with a six pack is attractive? No? Few do.  The term ‘GH gut” is thrown around allot but there is actually conflicting ideas as to how this phenomenon happens.  Being a bodybuilder myself, I have woken up in a cold sweat many times after having nightmares of having this dreaded disfigurement.

The abs are the optical center of the human body. The smaller the waist the more impressive the rest of the physique.  A prime example is the Men’s Physique division.  On stage and in photos they look amazing, but put them in a large T-shirt and they pretty much disappear into a crowd.  You see, by having a tiny waist they look like their other muscles are big.  Some of the national level guys and the pros look big in clothes, but the awesome aesthetics of the physique division comes from a tiny waist.

The Downfall of Bodybuilding Was Two Fold:

These two things took bodybuilding off TV and made it an underground sport, which is now super popular again thanks to the Bikini and Men’s Physique divisions. Both of these division’s defining feature is a tiny waist, thus amplifying the hourglass and X-frames respectively.

I, like many other bodybuilders, would love to have a tiny midsection but have everything else huge, shredded, and vascular.  But if it’s GH which blows your gut out, and its GH which makes you insanely shredded, how do you get both?  GHRP-6, thats how.

GHRP-6 is better than simply injecting GH for a number of reasons:

1) The injected or EXOGENOUS GH isn’t the same and doesn’t work the exact same as natural GH.

2) Exogenous GH injections cause an increase in IGF-1. This is the best thing since sliced bread INSIDE muscle tissue, but it causes your spleen and intestines and other organs to grow if its just circulating in your bloodstream. Permanently. So you eventually look pregnant. Only instead of a bun in the oven its oversized organs. GHRP-6 sparks a release of your natural GH and that is cleared quickly so IGF-1 is released but not nearly as much.

3) GHRP-6 won’t suppress your natural GH secretion like exogenous GH will.  So you can choose to stop if you want and you don’t have to worry about not making your own GH anymore.

5) Functions like a GH post cycle therapy if need be. After you stop using exogenous GH, switch to GHRP-6 and turn your natural GH back on.

To get the healing properties use about 100-150 mcg a day.  To build muscle 500mcg post workout to get the most out of the natural post workout GH release.  Data exists that carbs inhibit the GH release even when using GHRP-6, but injectable insulin amplifies the response. If you do choose to stack insulin with GHRP-6, and I wouldn’t if I were you, then its critical that you load up on fat free food.  The insulin would be a bad choice to have before a meal with fat as it would store the fat as body fat.   And you could go hypoglycemic since you need to have carbs in your blood ASAP after injecting insulin.  A moderate approach would be somewhere between the two extremes, I myself would start with 200 mcg a day and titrate up for tolerance.

The main side effect with GHRP-6 is the appitite increase.  Low dose (100mcg) does not create this problem but high dose (500mcg) does.  This may be the primary way you put weight on with the high dose, purely its ability to bind to the ghrelin receptor.  Ironic that a drug you take to NOT LOOK pregnant results in you eating like you ARE pregnant.  Additionally, Jail time.  GHRP-6 along with GH  are illegal without a prescription.  Insulin is a grey area, It is legal to buy without a script but it is the most dangerous thing mentioned above.  Way more than any steroid or other prescription drug.  Insulin use is for the serious athlete who is prepared to die. If your life means more to you than having superhuman muscles then don’t use it.

To get around this legal issue LG Sciences has an herbal supplements that mimic GHRP-6. Ghenerate is a sublingual spray that is as effective as other GHRPs.  I also included an herbal GHRP analog in my Wyked 2.1 pre workout drink.

Nothing in this article or on this site should be considered medical advice or as an endorsement to violate any law of the country in which you reside.  The information given is for fun and entertainment purposes only.  All claims are 100% dependent upon proper diet and exercise.  Please consult a medical practitioner prior to any diet and exercise program.